A Summary of This Year's Championship

This year being held in August, having once again been postponed from the usual June spot due to COVID restrictions, our Club Championship Day provided WCGC members with the chance to win our most prestigious titles and write their names in club history. The weather forecast looked ominous, with thunder and lightning supposedly on the way ready to scupper the schedule for the day. Thankfully we dodged the storms and the day went ahead as planned!
Judging by the scoring, the course was playing tough! Competitors had to contend with unfamiliar and treacherous conditions such as grass on the fairways, rough surrounding them, quick greens, and tricky pin positions – not to mention the rain.

The Rain Failed to Dampen Our Spirits
× 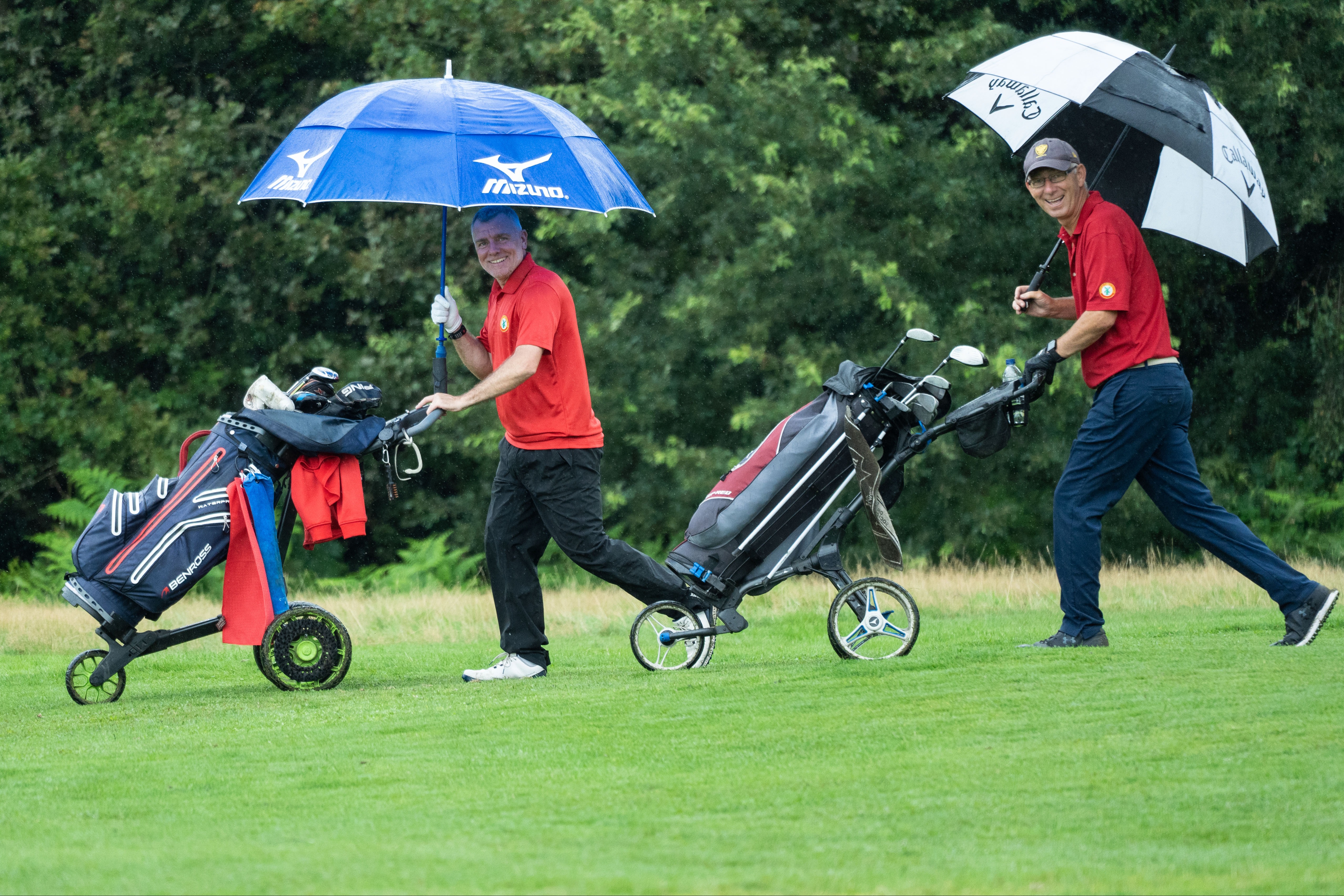 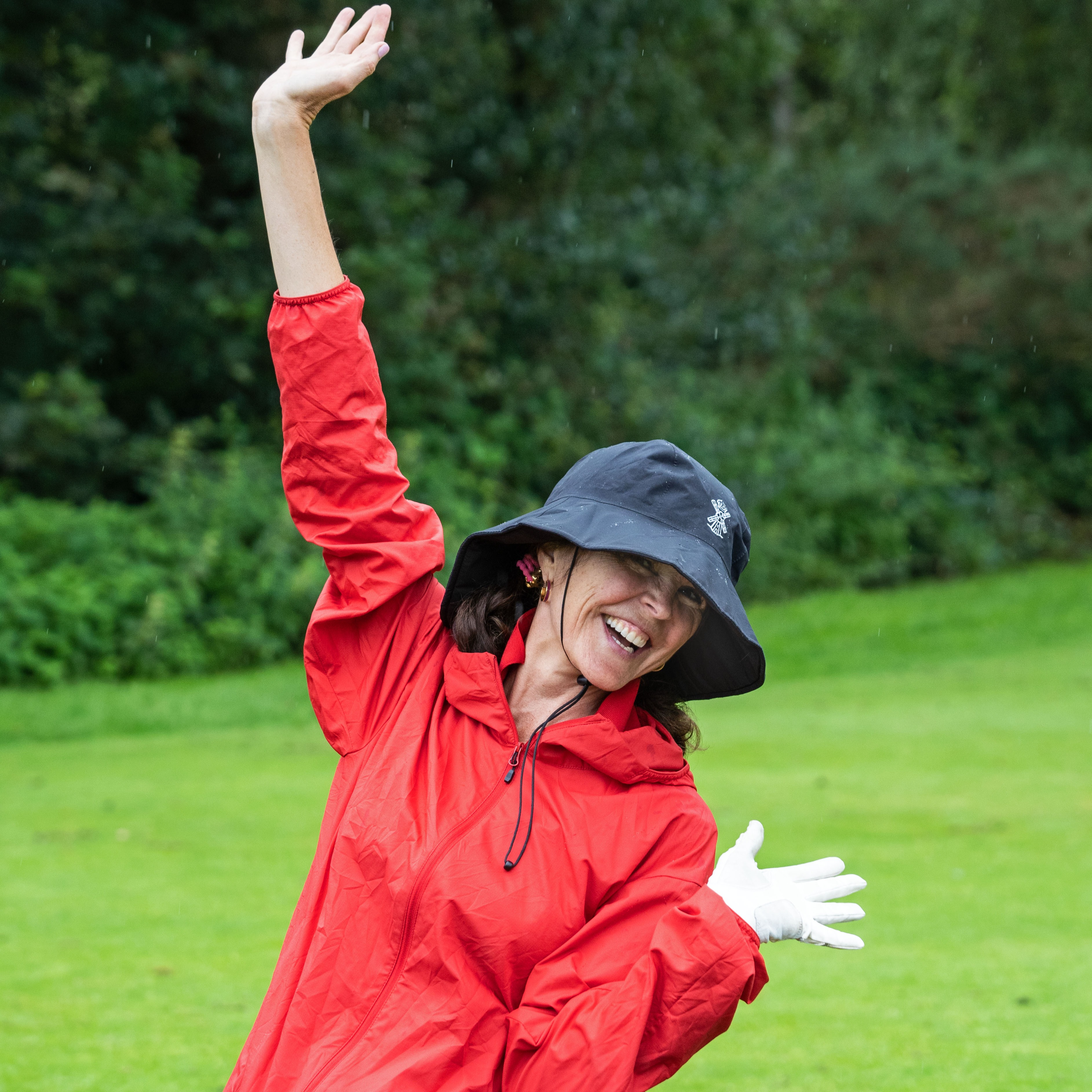 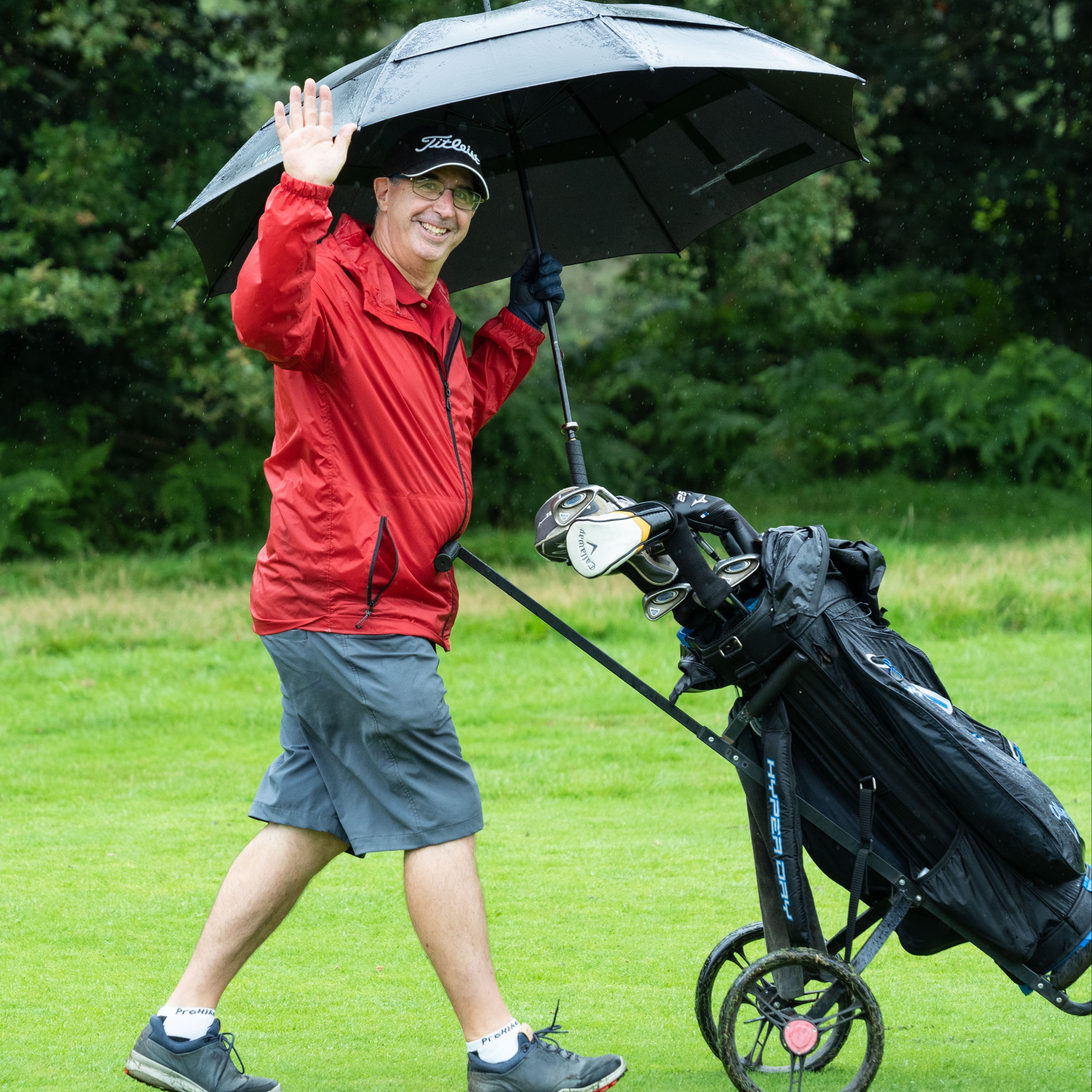 These hardy competitors had to get up at the crack of dawn and prepare for a long day on the course. After a dry start the rain soon settled in but we didn’t let it dampen our spirits.
After round 1 it was all to play for… Defending champion Wil House had the clubhouse lead with a gross 73 but the pack were hot on his heels. There were 8 players within 6 shots of the lead including Jack Turner who shot a brilliant 74 (4 better than his handicap) and Paul Fox who shot 76, also besting his handicap.

With the rain falling, round 2 got under way with all 3 players in the final group hitting Provisionals off the 1st tee. It was tense! Jack Turner fought valiantly but ultimately couldn’t keep pace with the leaders. A brilliant 33 on the front 9 thrust Nick Murray into contention. It was a 4-horse race between Wil House, David Boyce, Peter Teeuwen-Greene and Nick Murray. Pete opened the back 9 with a birdie but the putter had been cold all day and ultimately this would be his downfall. Wil took control on the 11th where David came unstuck with a Triple-bogey 7. Nick, two groups ahead, dropped a couple of shots but hung on to post a clubhouse lead of 151. Wil however held his nerve on the closing holes to claim the title by 4 shots!
Congratulations to Wil, who waited 15 years to get the red jacket on his shoulder, has now done it two-years on the trot. Whilst we didn’t have the play-off drama of last year it was still an exciting and hotly contested championship.
With Wil being Club Champion, the Div 1 winner was Nick Murray and runner-up David Boyce. The prize for best net score in Div 1 went to Paul Fox who held on in round 2 to follow up his net 67 from round 1 with a net 70. 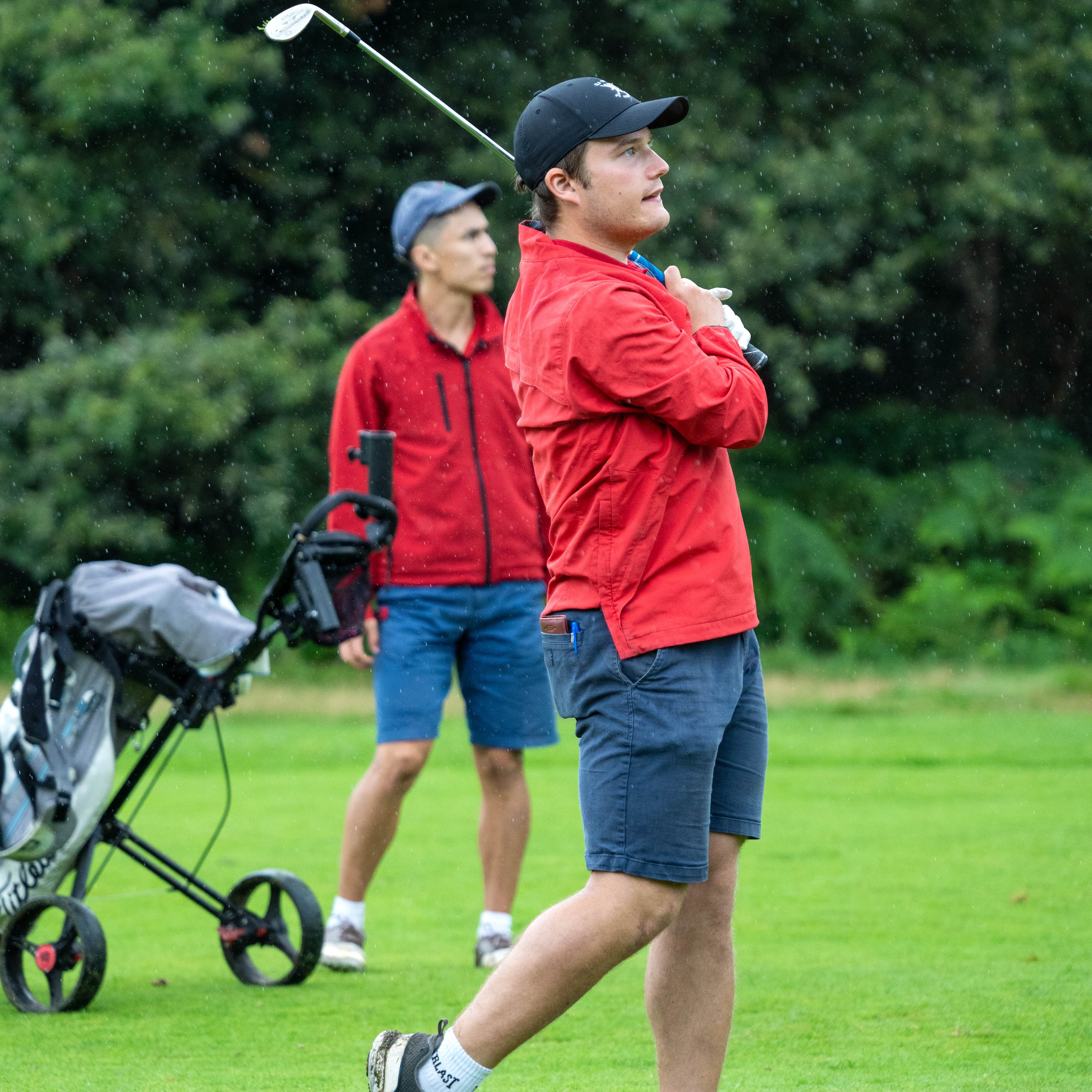 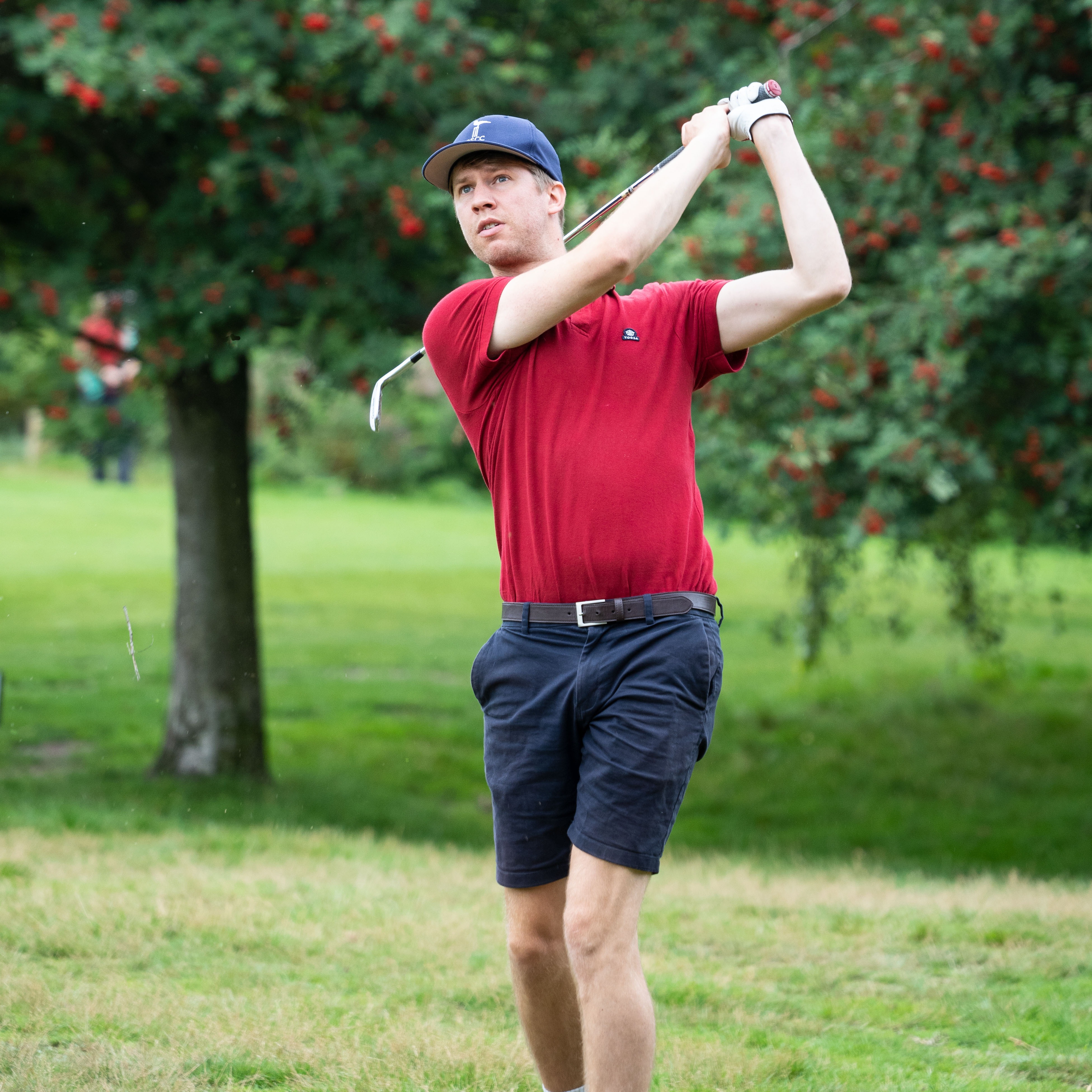 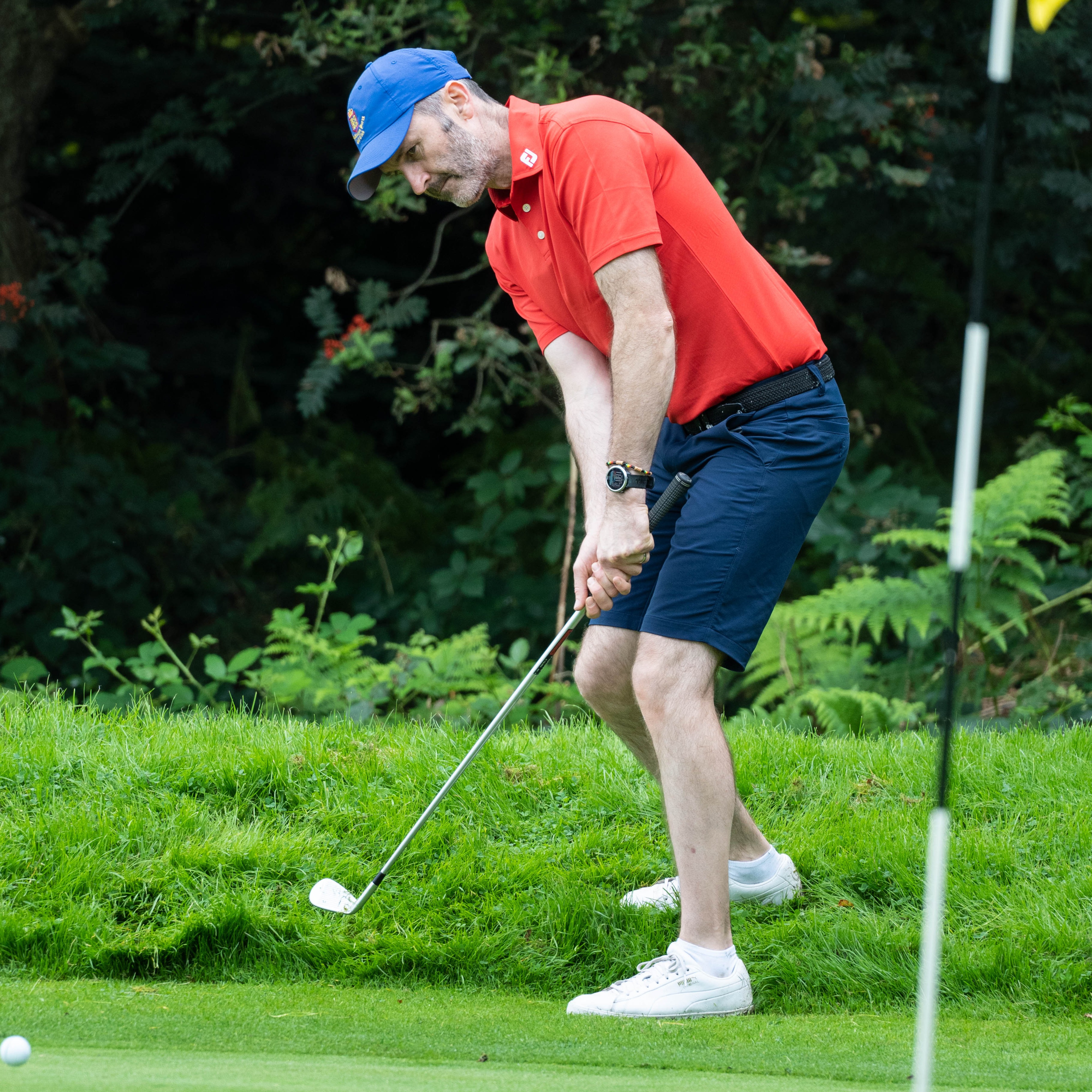 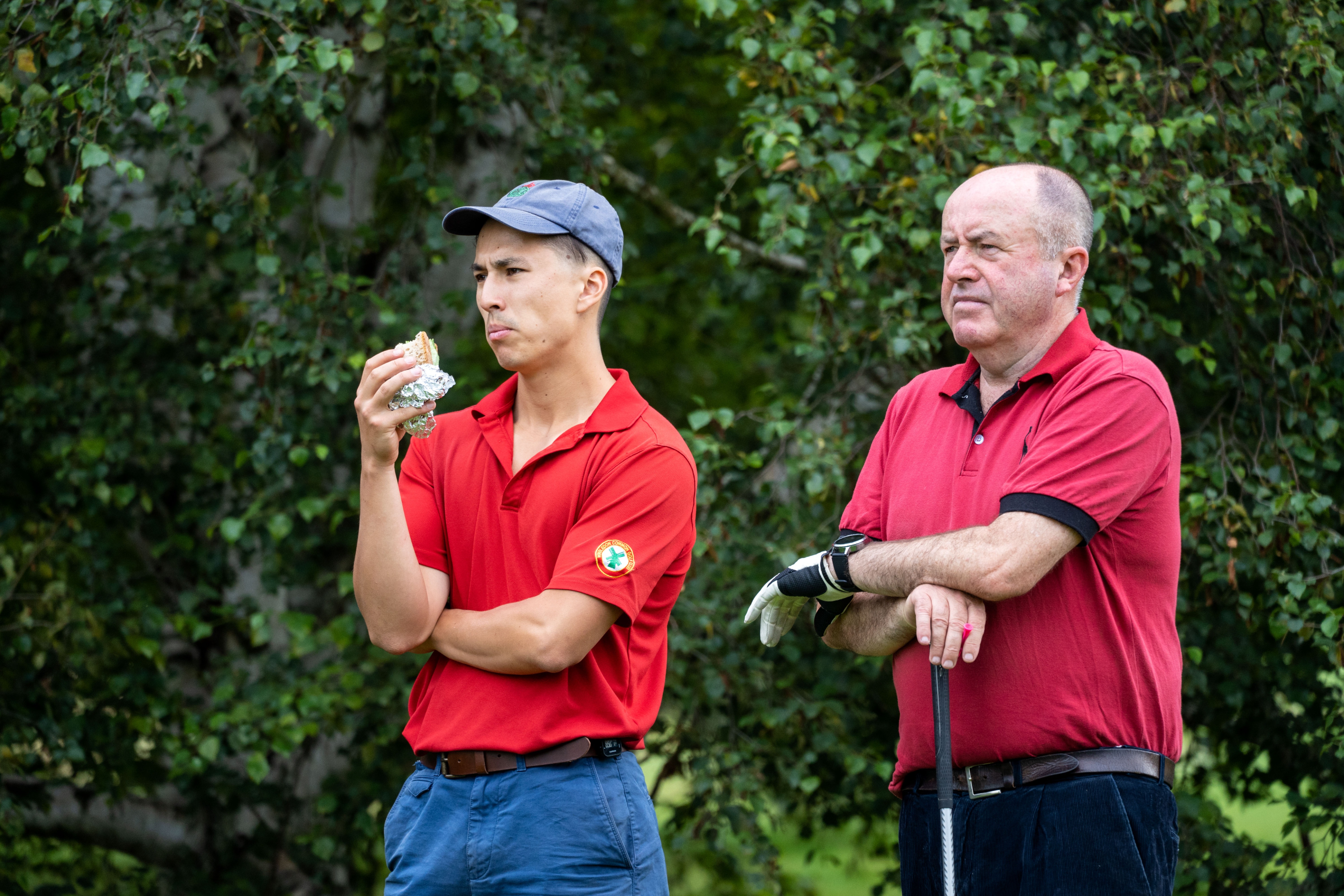 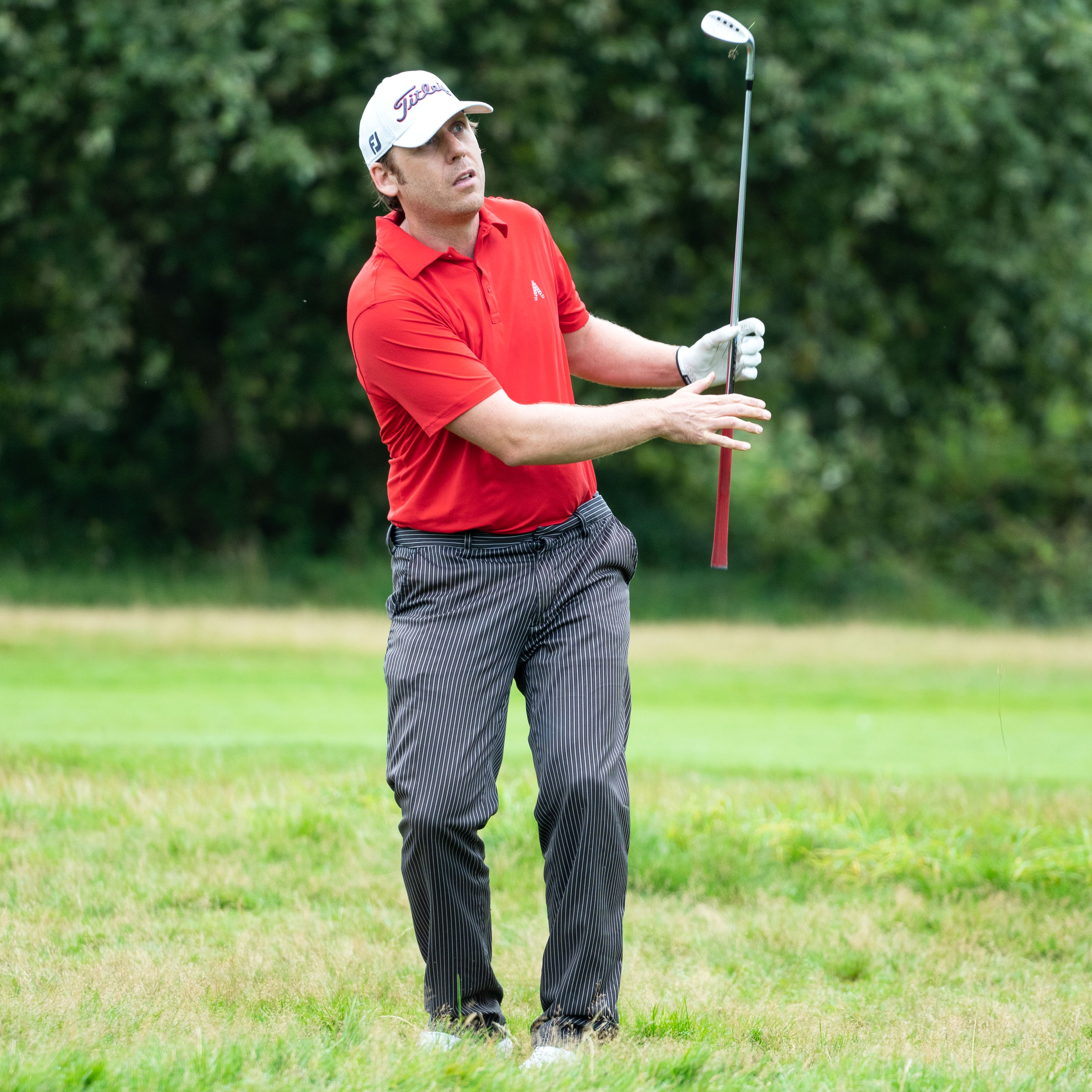 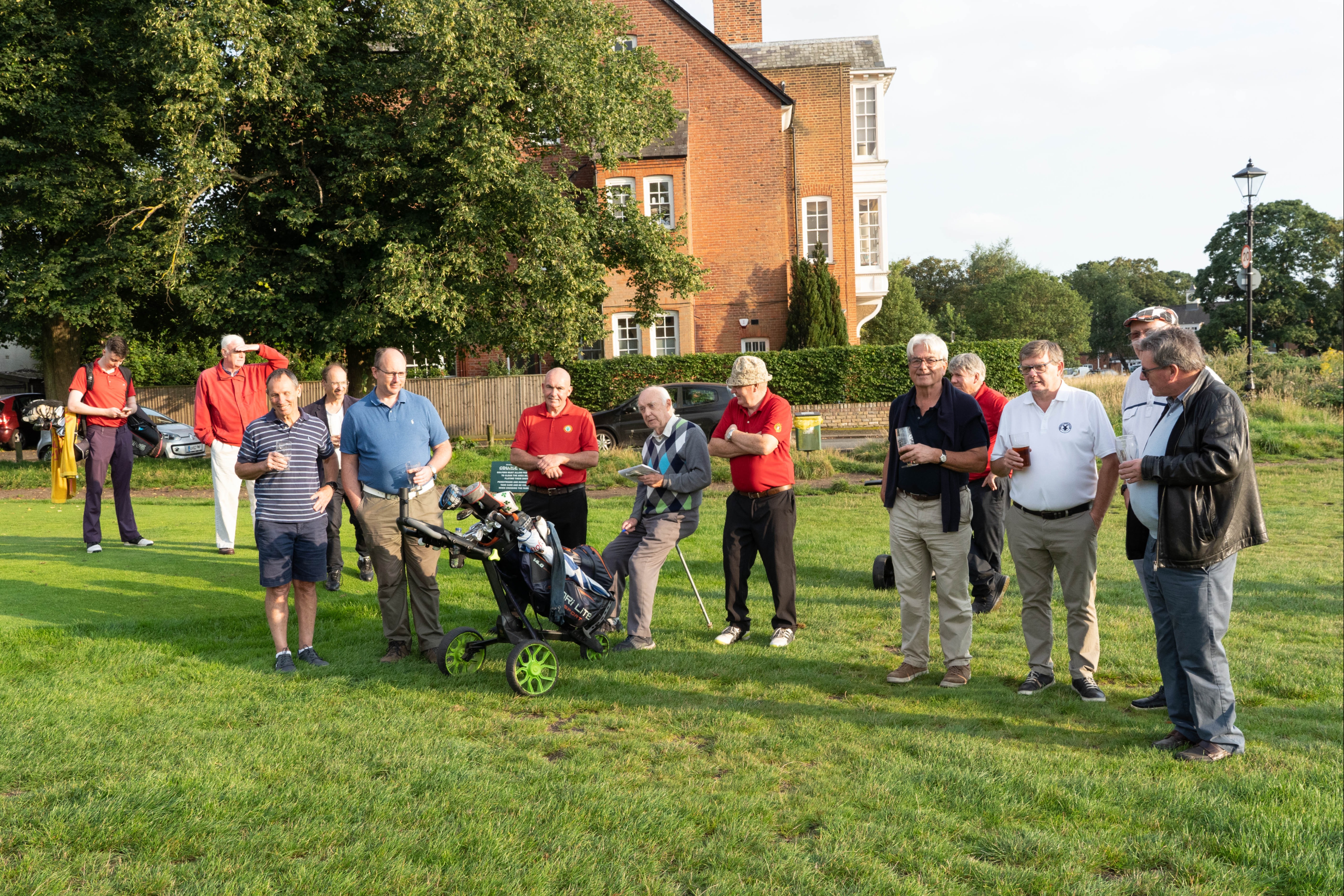 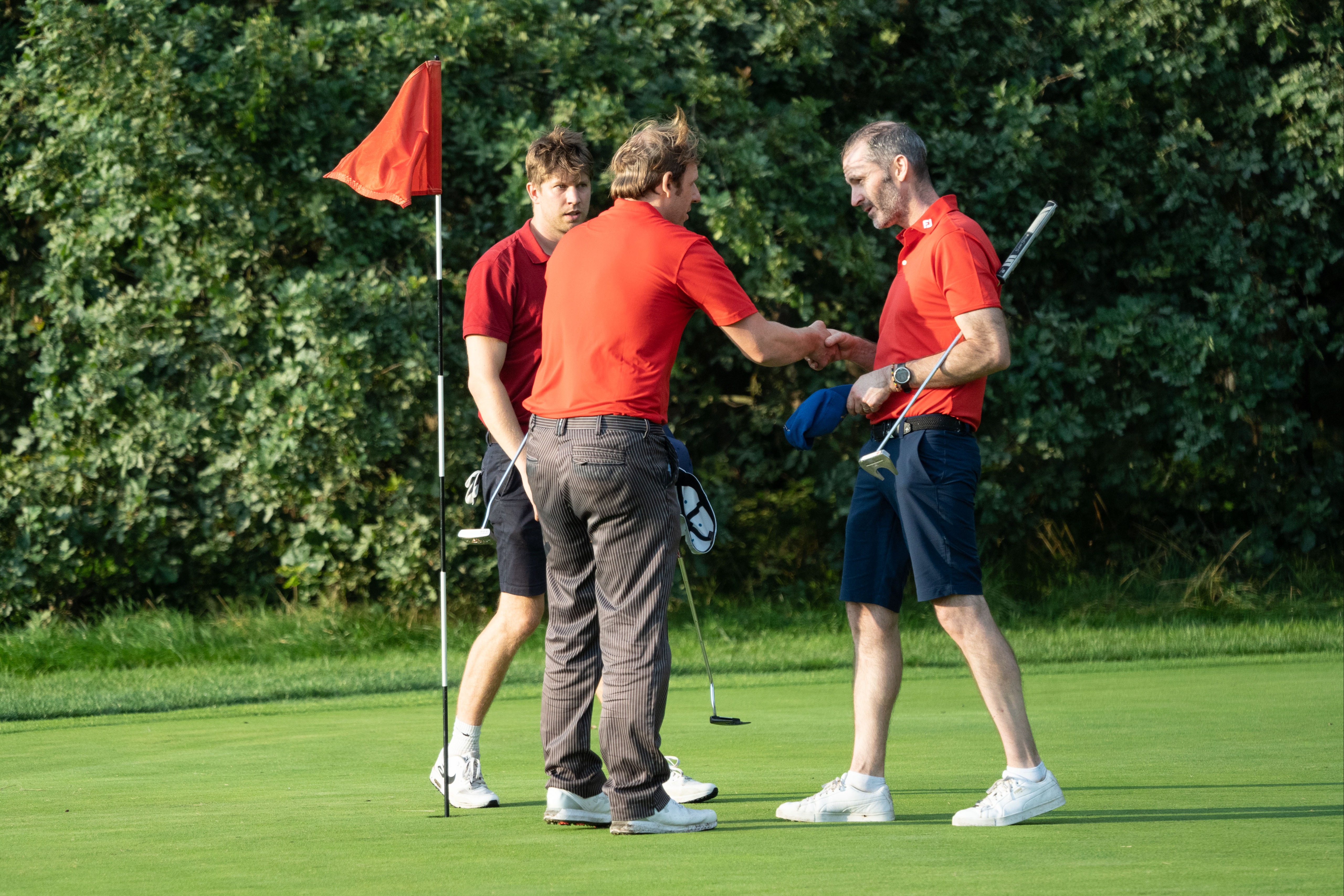 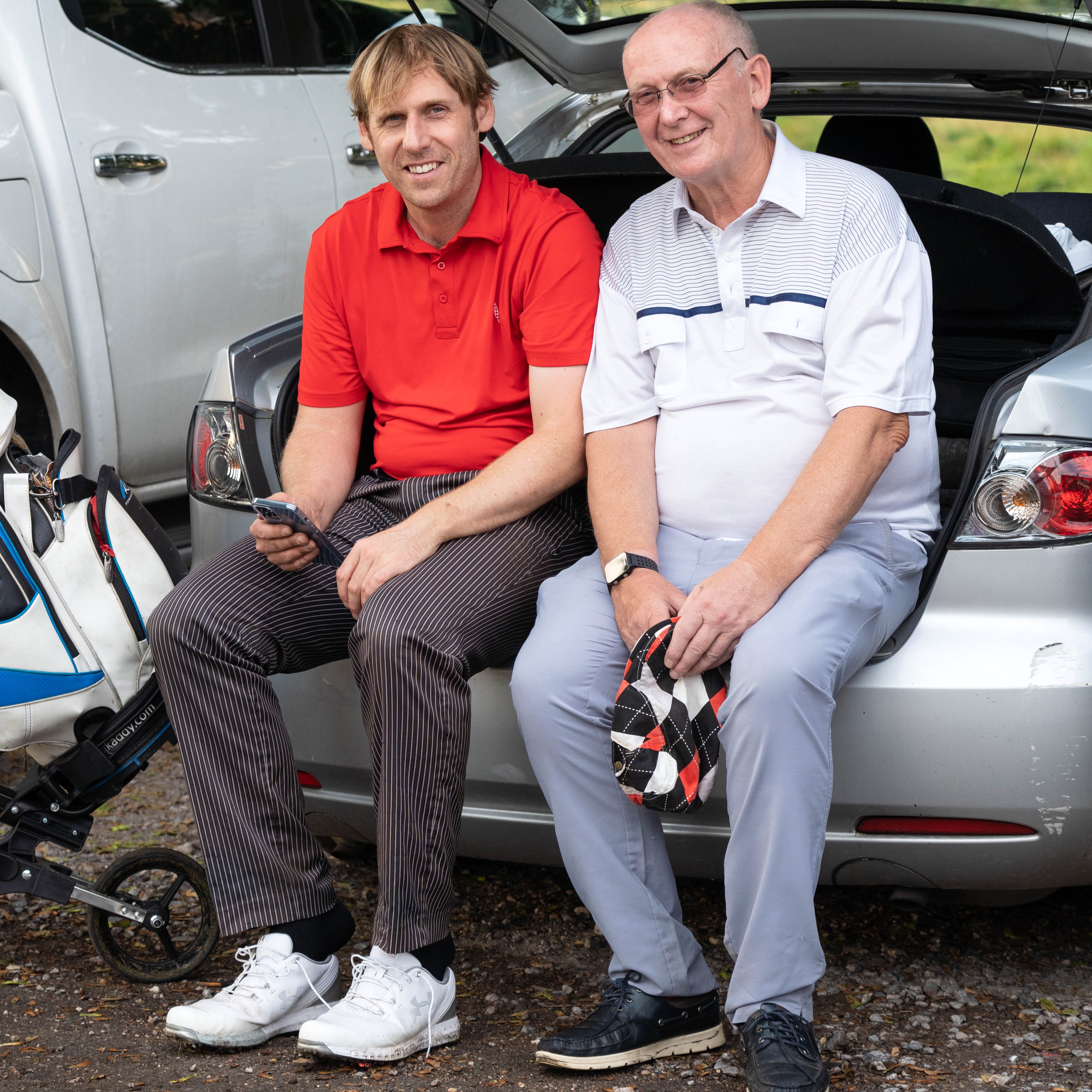 Newcomer Alison Dalgleish, playing off 9, began the day as favourite with reigning champion Jo Elder and Madge Corbitt looking to mount a challenge.
It was close at the turn, Alison and Madge both shooting 39 on the front 9 and Jo just 5 shots behind. Alison then stamped her authority beginning the back nine 4-3-4-3 BUT it wasn’t over yet… Alison was not in Paradise when playing the 14th! A Quadruple Bogey 8 brought the others back into contention with 4 holes to play. But Alison held her nerve to shoot a magnificent 79, eventually beating Madge by 5 shots. Alison’s golf was no doubt helped by the pre-round pint of Carlsberg.
The prize for best net was snapped up on countback by Ingrid Southorn with a net 78. And finally, the division 2 prize was won by Susie Mchugh with a monumental total of… actually I best not mention the No. of points. Well done, Susie! 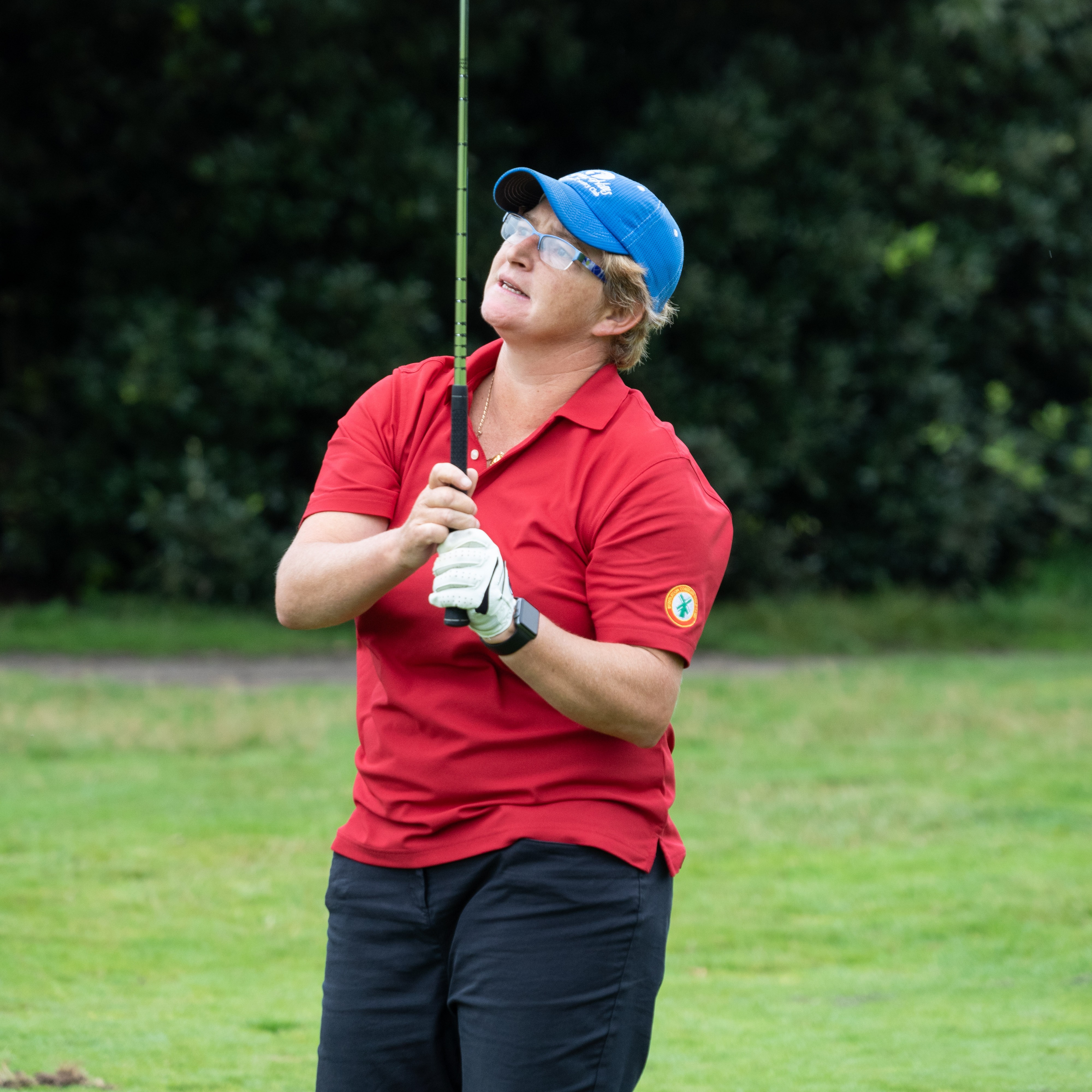 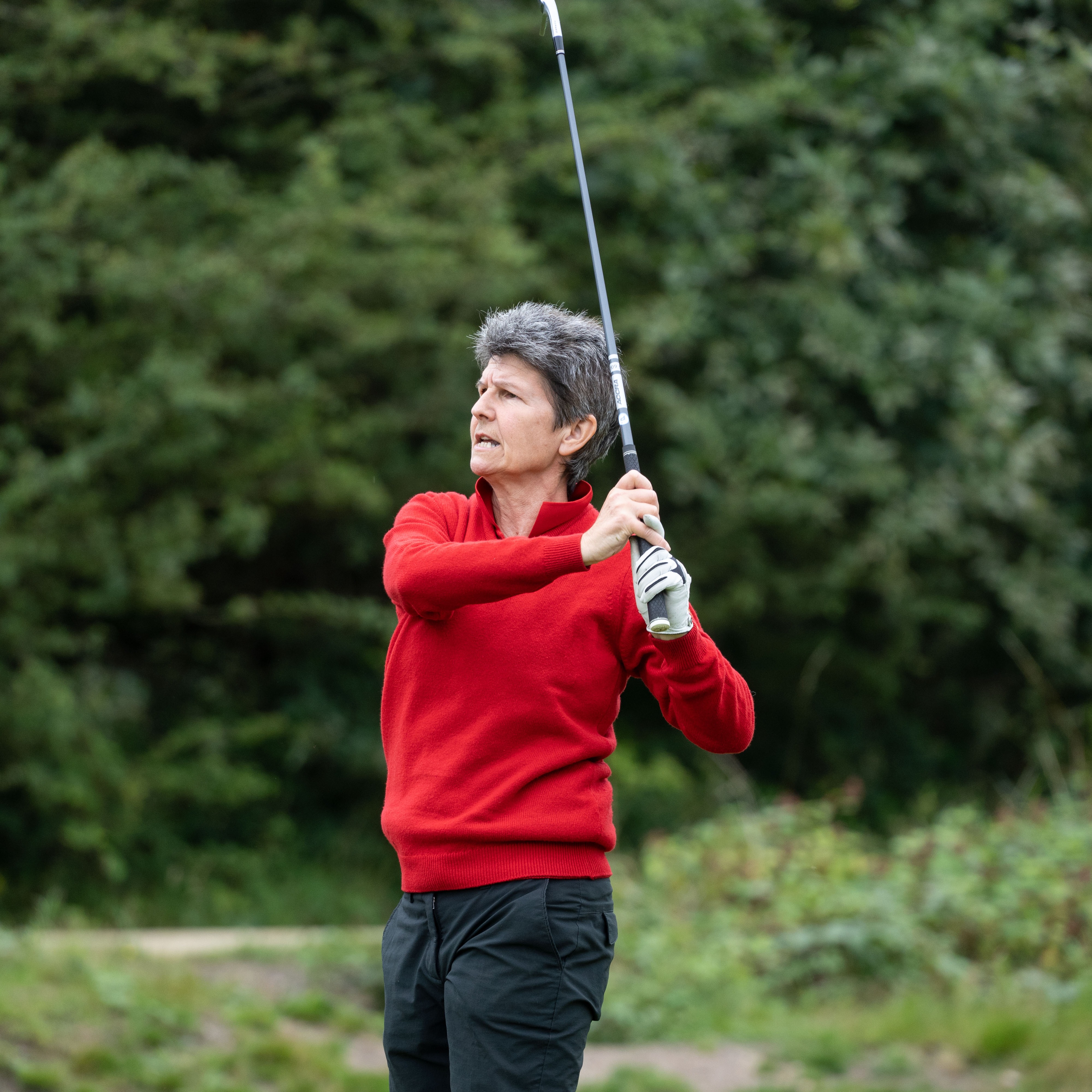 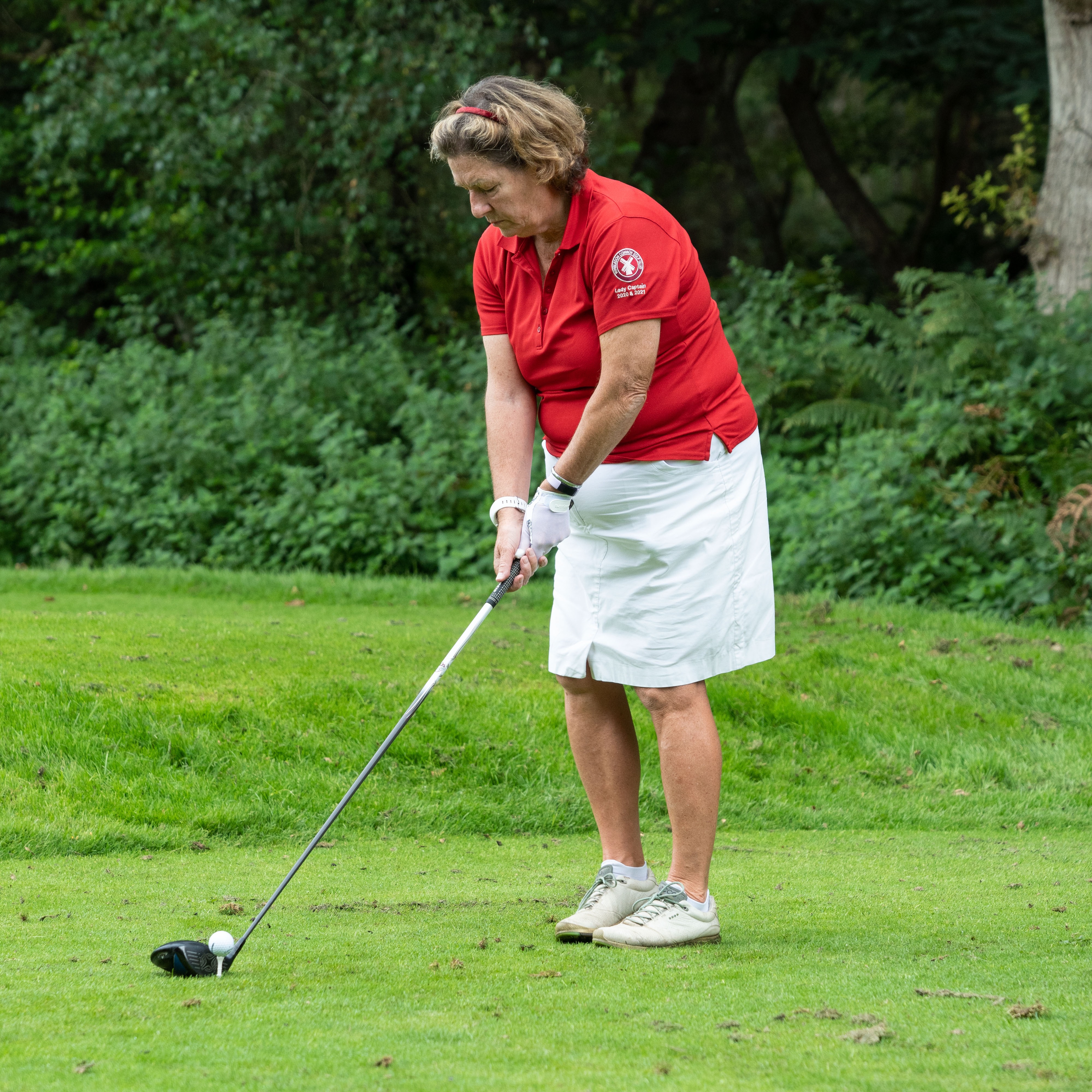 This was dominated by Paul Clarke – Paul nearly withdrew due to an ankle injury (beware the injured golfer). Paul shot a magnificent 78 (net 65) in round 1 to blow the field away and take a TEN shot lead into round 2. He then held it together in round 2 to claim the top prize. Ian Laws gave it his best but had to settle for the runner up position. 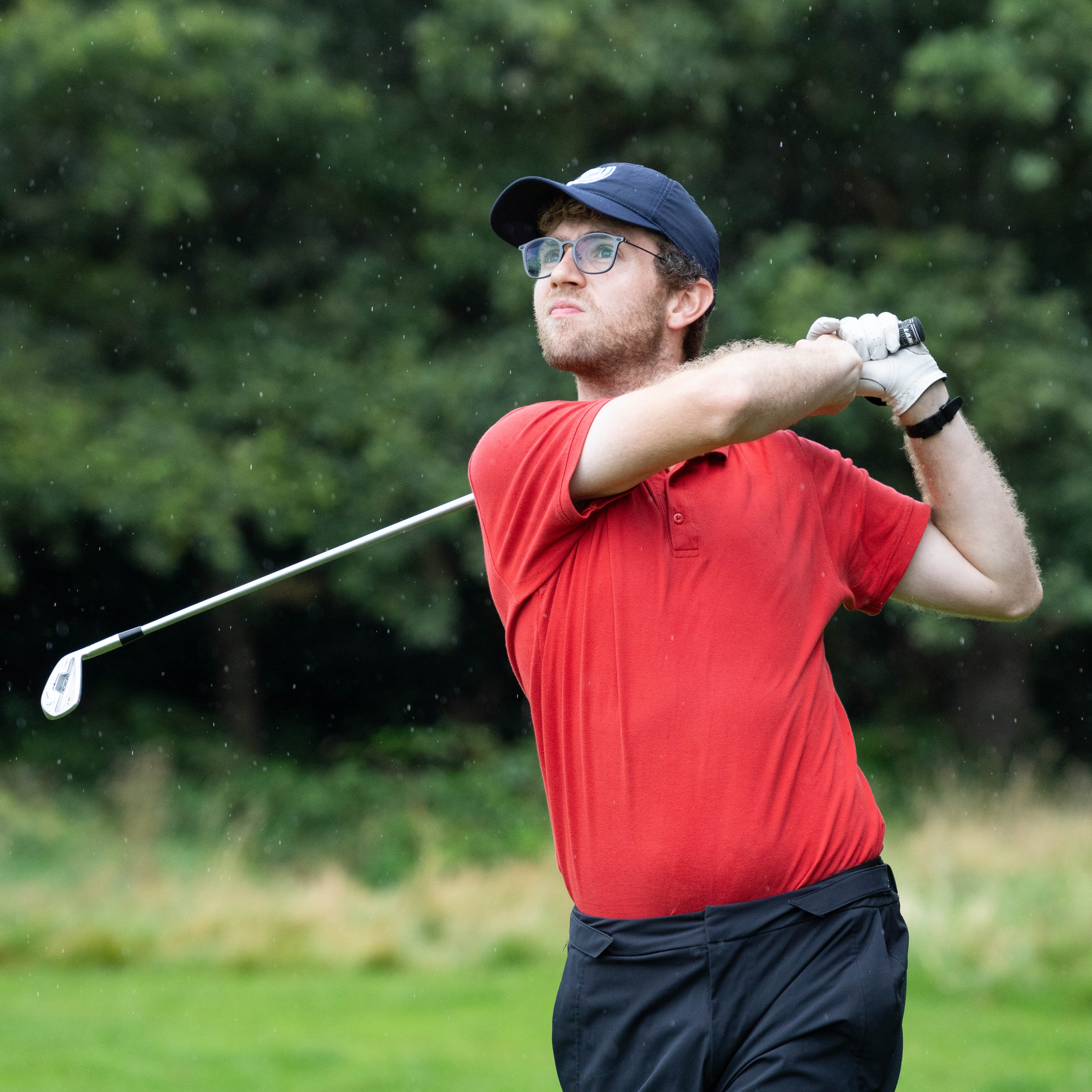 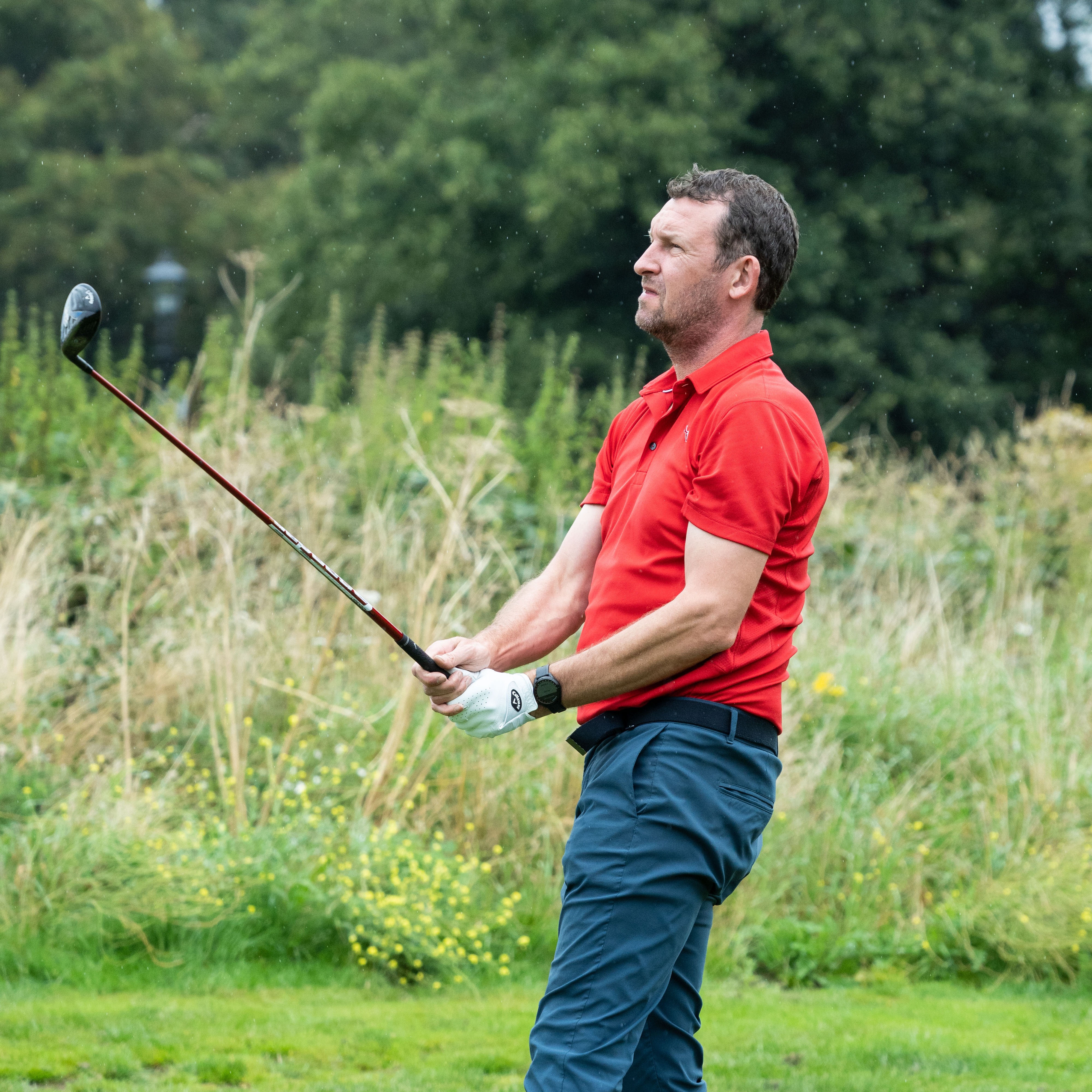 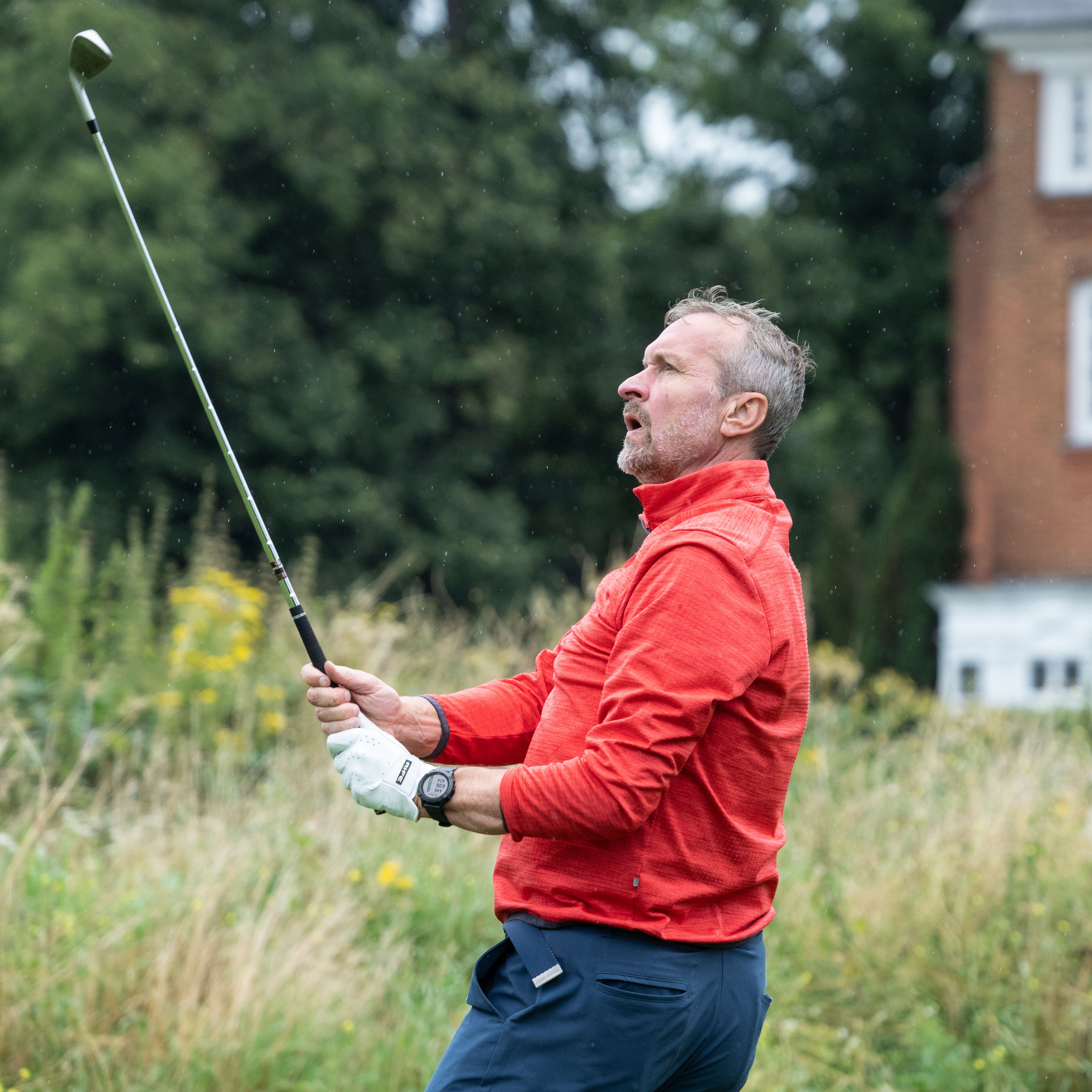 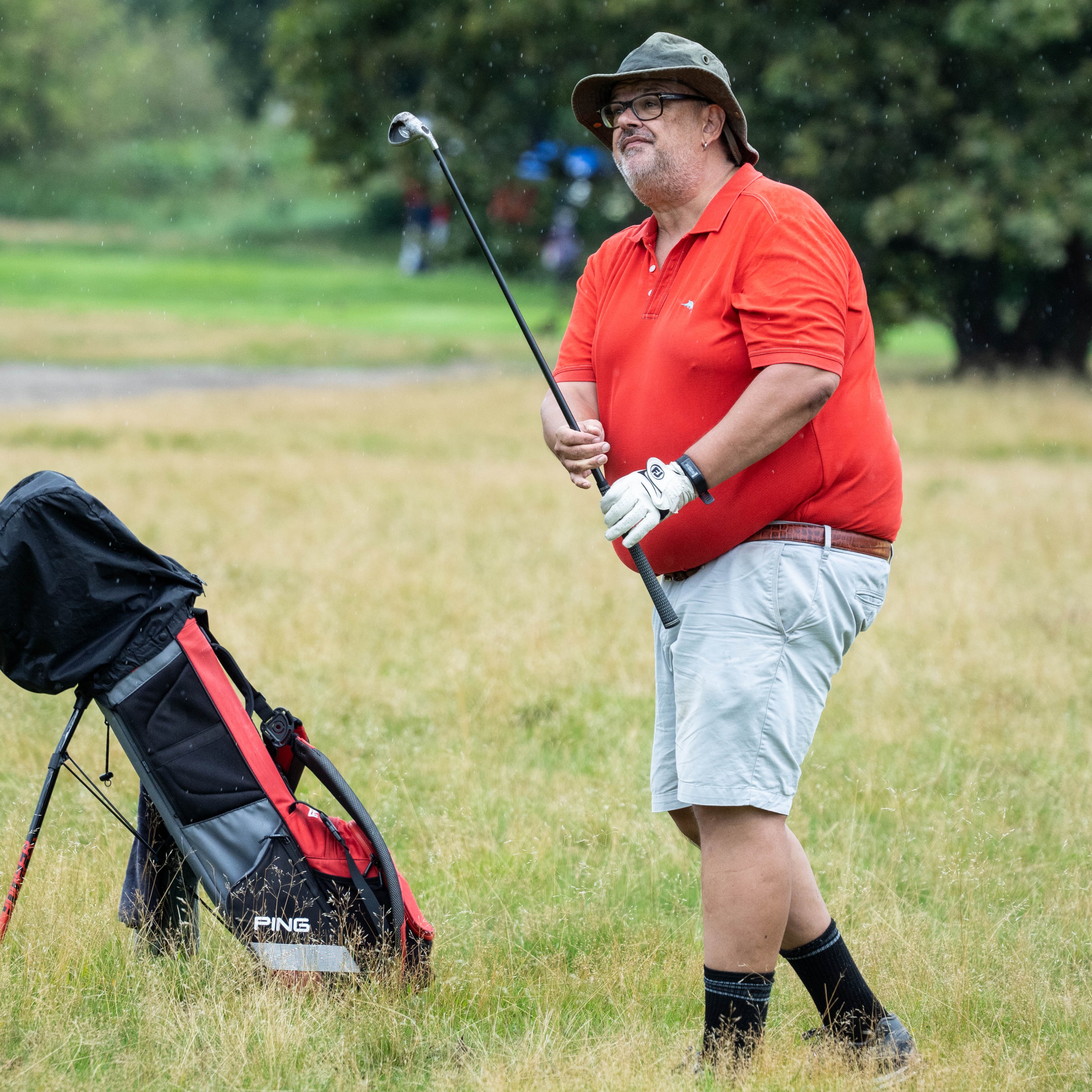 It wouldn’t be a proper club championship without a Finn getting their hands on a trophy. It wasn’t Martin this year, in fact it was Joe Finn who claimed the Div 3 title with 66 points, holding off last year’s runner-up Neil Wilson.

Last but by no means least – The Golden Hare… the prize for being the most improved from round 1 to round 2. This was won by Dwight Lindo who recovered from an abysmal 102 in round 1 to shoot a very respectable 85 in round 2 – an improvement of 17 shots!!

Round 1 and Round 2 were quite different for Dwight!
Round 1 - Hacking out of the bushes
Round 2 - Striping one down the fairway!
× 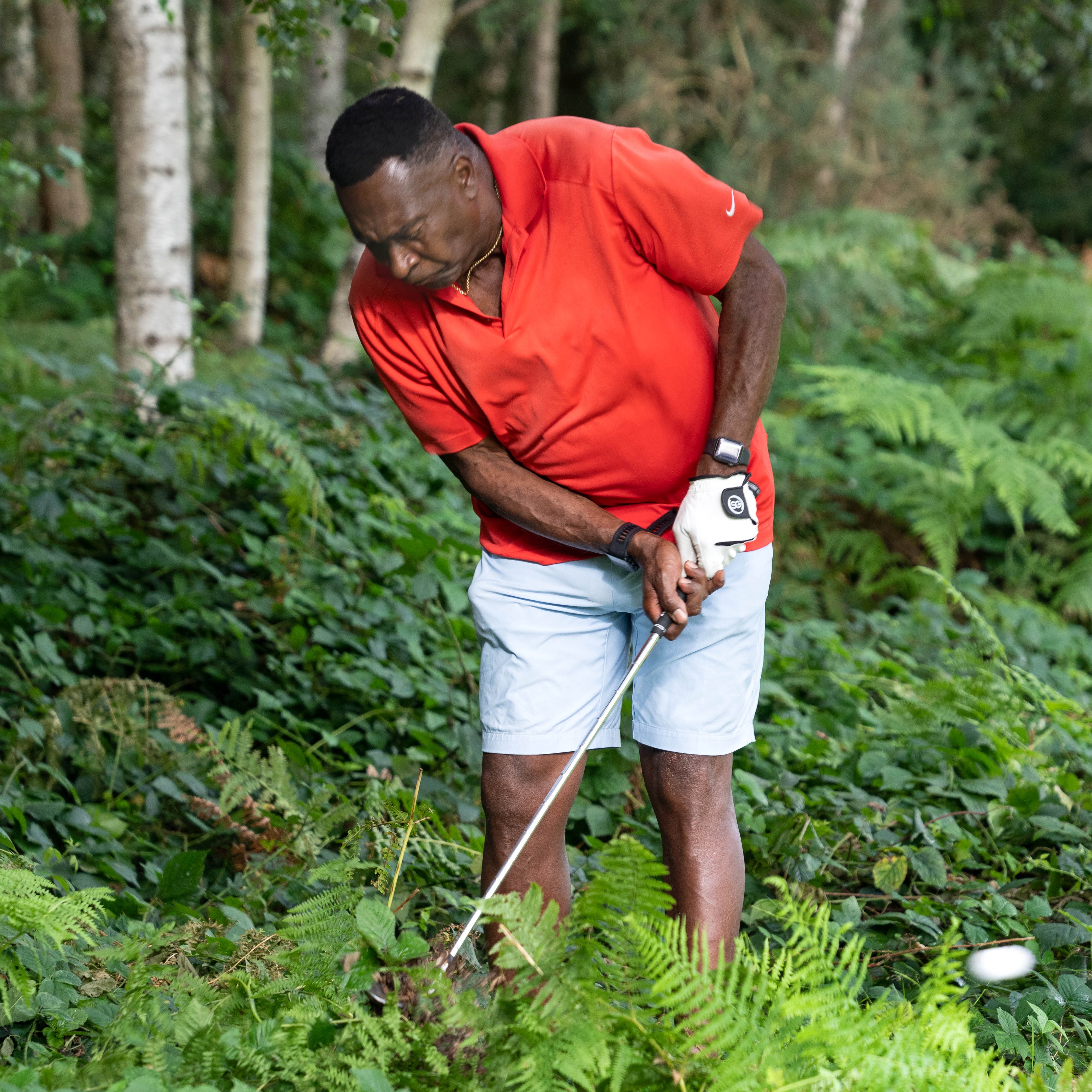 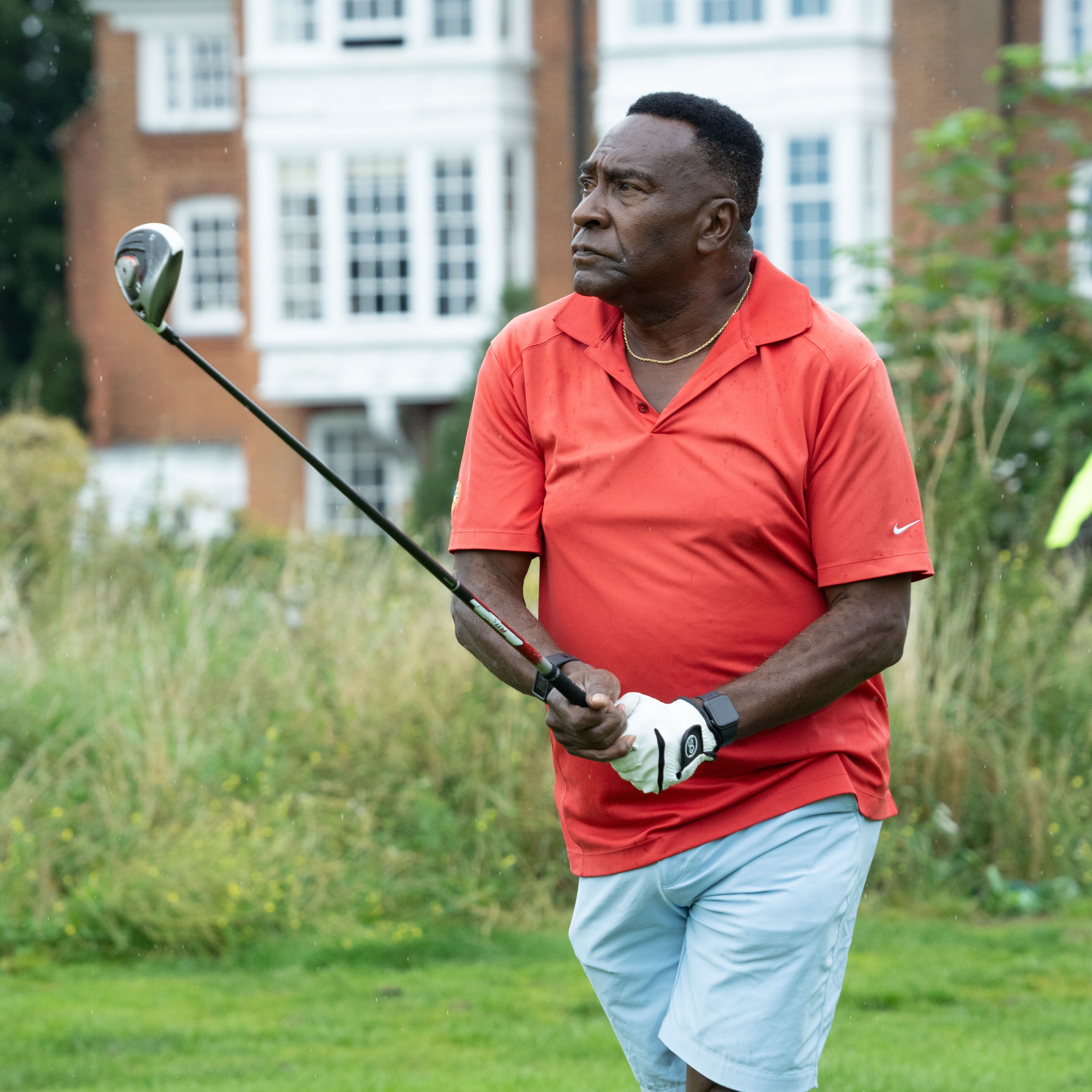 This was an interesting one. Played over 18-holes and as a stableford you would think this was the easier competition to enter. But seeing all the competitors in the clubhouse after their round, they all looked like they had been through physical and emotional turmoil. Then I saw the scores and it explained all. The less said about them the better… Cris Peckham came into the clubhouse like everyone else… looking demoralised, saying he didn’t play well – but his 33 points were enough to take the title with nearest challenger Charlie Hampden-Smith on 31 points. 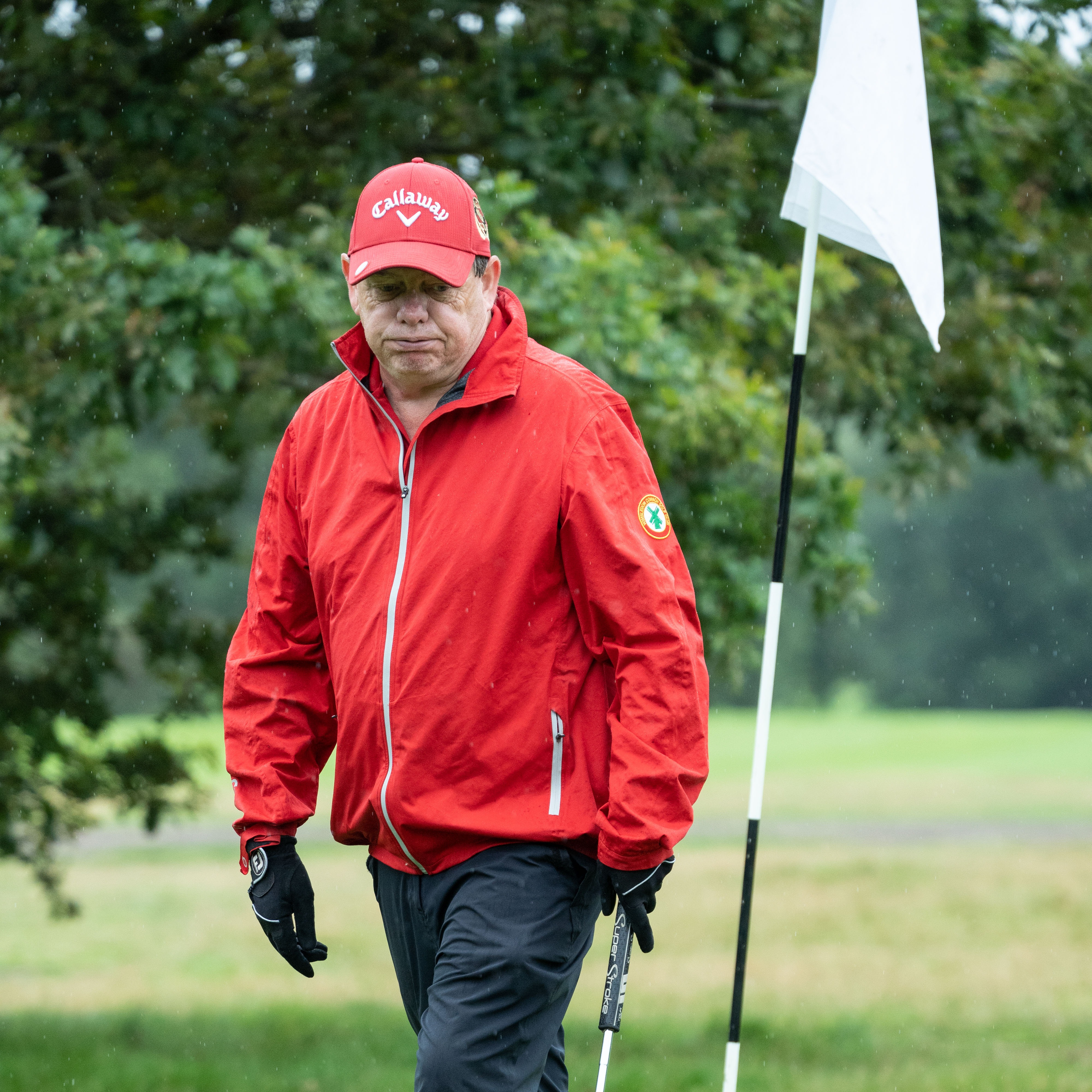 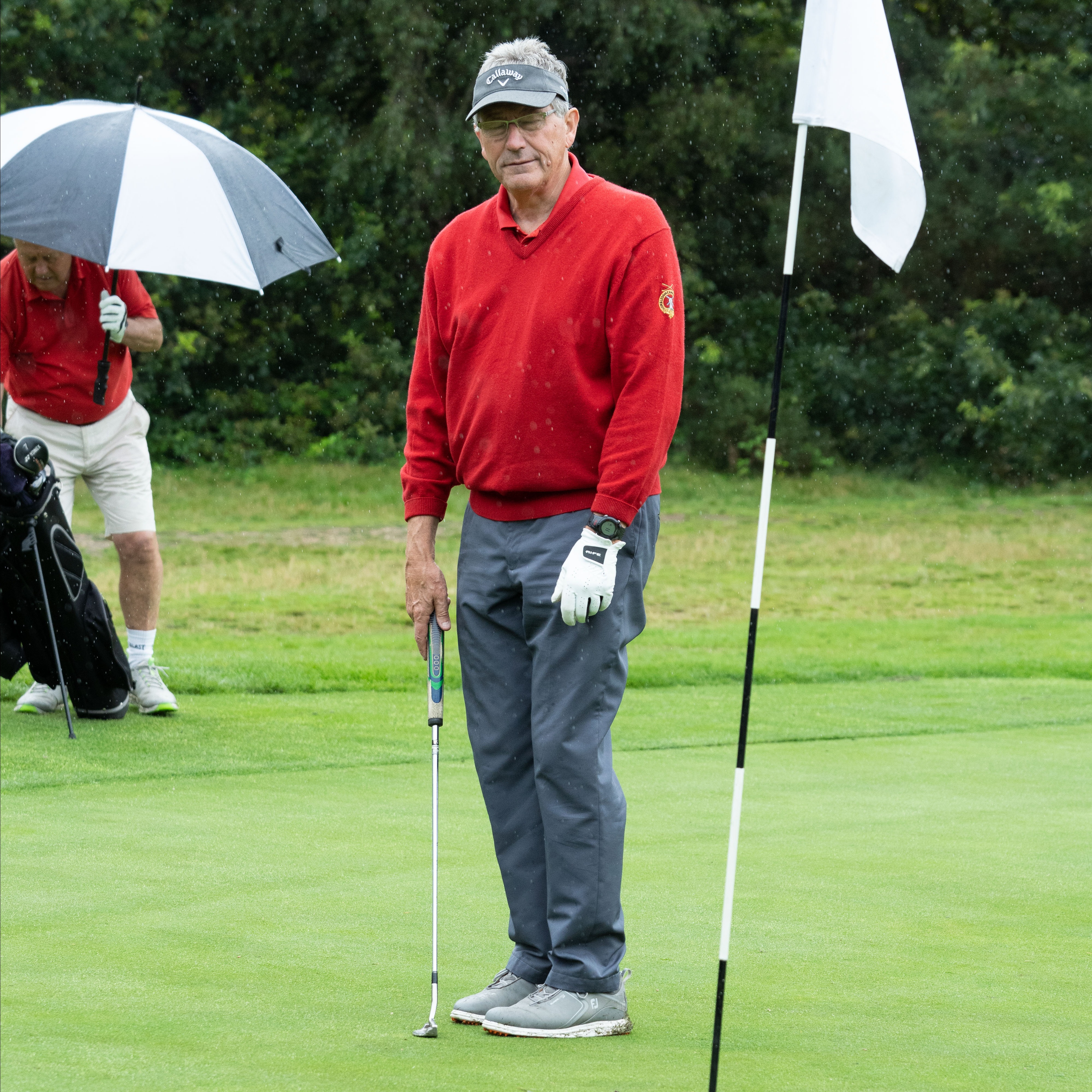 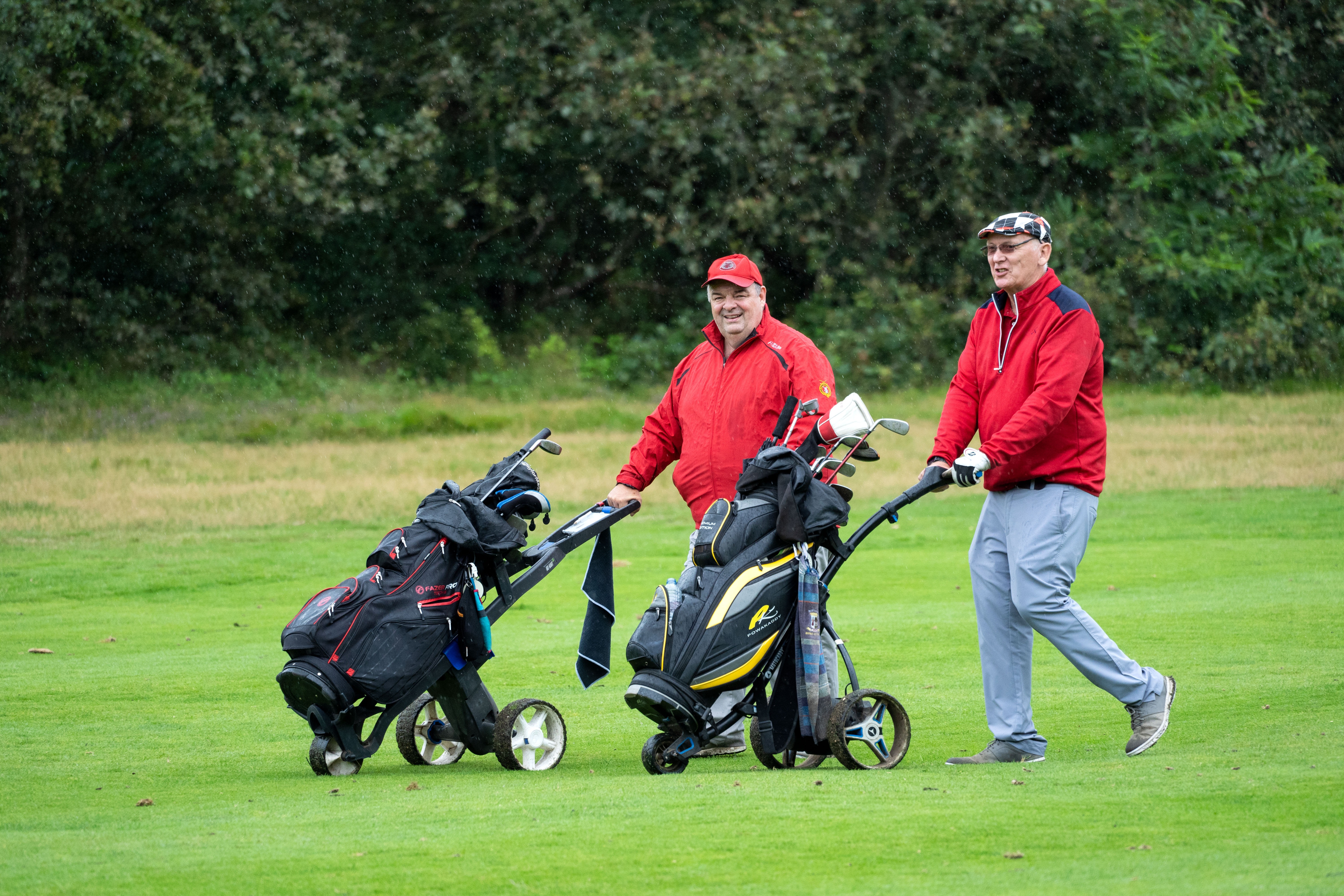 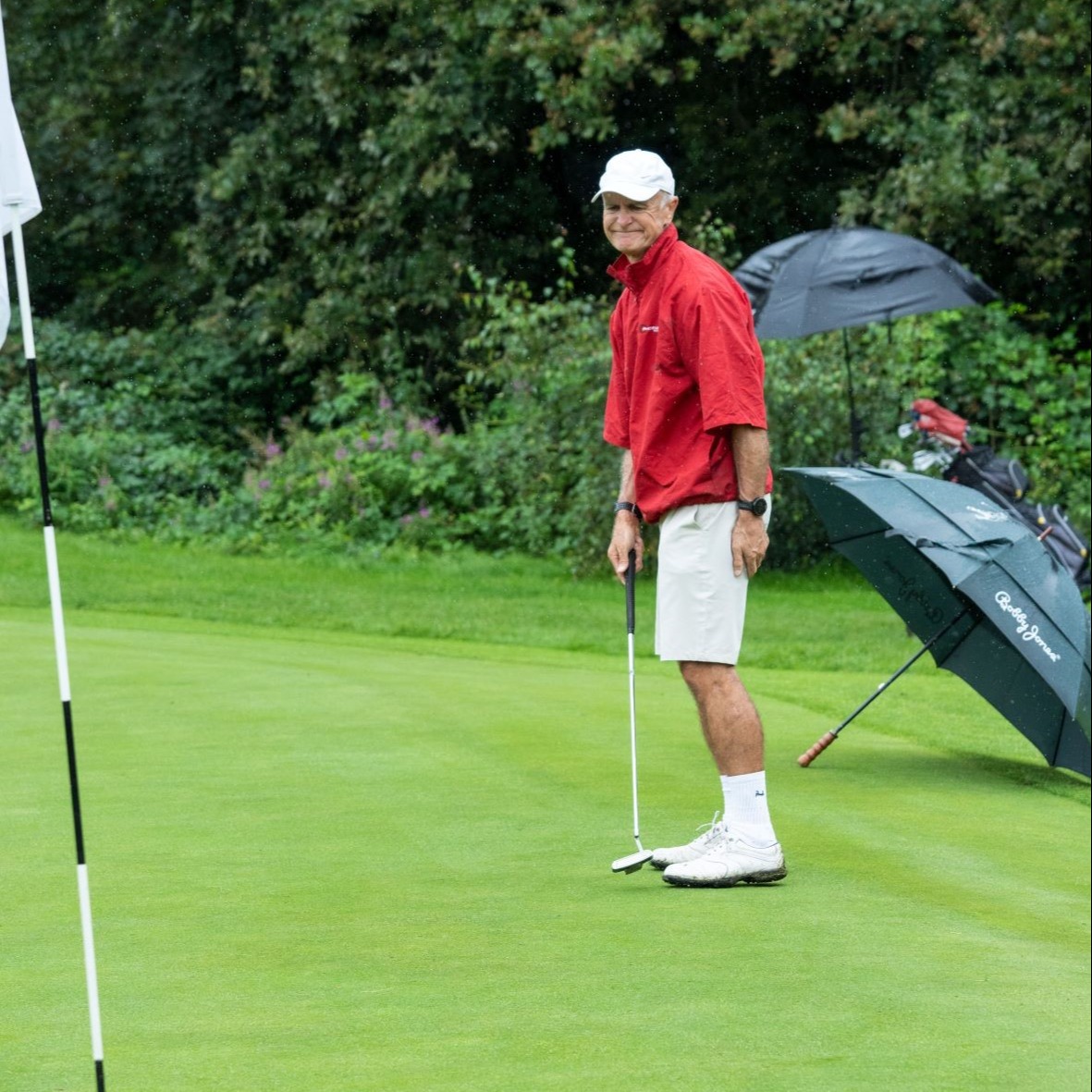 Thank you as always to all the volunteers who did a great job spotting and marshalling the public. You may have spotted Paul “Flasha” Willatts out there flashing on the common, as he so often does. He got some great pictures despite the gloomy conditions. Special thanks to our President – Brian Cox for refereeing the day and verifying the scorecards.
I know not many of you felt like this at the time – but the course was fantastic! Probably the best we’ve ever had it for a club championship. Our 2-man greenkeeper team, Ian and Charlie, worked incredibly hard to get the course so well presented and have our wonderful greens running so true.
My Final word goes to Emma. Without her this day simply wouldn’t be possible. She worked tirelessly (fuelled by coffee) from 5:30am, getting everything ready then making sure everyone got a parking space and her day wasn’t done until the last members left the club in the early hours of the morning. Make sure you show her your appreciation next time you see her.
I’m already looking forward to next year when hopefully we can return to our usual June date with burnt out fairways providing 100 yards of roll and a full field to take advantage.
All the best
Jack

P.S. if you do happen to forget the result of this year’s championship, just speak to Gordon House. I’m sure he won’t hesitate to remind you.